· The distinct curly coat of the different Rex cats is due to spontaneously occurring mutant genes.
· The various Rex breeds are distinct and were discovered and developed independently of each other.
· Each Rex breed is named after the region in which they were discovered.
· The most famous are the Cornish Rex, Devon Rex and Selkirk Rex. 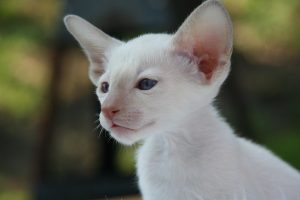 · Rex cats have medium length compact muscular bodies with an arched back.
· Their legs are long and straight.
· The Cornish and Devon Rex cats have triangular heads while the Selkirk Rex have a rounded head.
· The Cornish Rex cats have a long face and a long straight nose while the Devon Rex cats have prominent cheekbones and a shorter nose.
· Rex cats have large ears but the Devon Rex cats have particularly very large ears.
· The eyes of the Rex cats are large and oval shaped with colours matching that of the coat.
· The distinguishing feature of all Rex cats is their wavy coat pattern.
· Cornish Rex coat is short with a curly undercoat that is fine, silky and close-fitting. They have no top coat or guard hairs. The coat form ripples on the back and tail.
· Devon Rex coat is very short, fine and wavy. It is a silky undercoat with a few guard hairs. The hair strands are very delicate and are easily broken.
· The Selkirk Rex has a coat that is thick and dense with lambswool texture. They have curled guard and awn hairs. 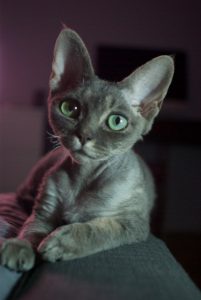 · Rex cats are active, agile and love going for a walk on a lead.
· They readily form strong bonds with their owners.
· The Cornish Rex is intelligent, thoughtful and active.
· The Devon Rex is very playful and mischievous.
· The Selkirk Rex is calm and affectionate but can be playful too.
Needs
· A rubber brush is ideal for Rex cats because it does not scratch the skin.
· The Cornish Rex needs gentle brushing and the fingers can be used to set the waves.
· The Devon Rex fur is very delicate and breaks easily so they require very gentle stroking with a soft mitt rather than a brush.
· The Selkirk Rex needs gentle regular grooming with a wide-toothed comb.

· The name Rex is taken from a curly coated rabbit of the same name.
· A “Rexed coat” of the Cornish and Devon Rex is produced by a recessive group of genes producing a mostly tightly curled, soft-textured coat.
· A “Selkirk Rex Coat” is produced by a dominant gene which is the exception to the general Rex group producing a shaggy cat with a soft, plushy and curly coat.