· This is an ancient breed of cat, being one of the first cats mentioned in recorded history.
· This breed originated from the Korat Province of Thailand and is called Si-sawat.
· It is one of the distinctive Thai breeds of cats.
· The Korat is described and illustrated in 16th century Cat-Book of Poems called the Smud Khoi manuscript.
· The first pair of Korat cats arrived in United States in 1959 and was accepted as a breed in 1966.
· It reached Europe in 1972, although it is believed that they may have been there since late 1800s but were incorrectly regarded as Siamese.

· Today’s cat is identical in appearance to the ancient ones as seen in illustrations in the old manuscripts.
· The cat’s body is medium-sized and semi-stocky. It is firm and muscular making the cat surprisingly heavy for its size. 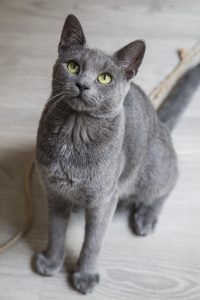 The female has a daintier body conformation than the male.
· Males weigh an average of 5 kilograms and the females at 3.5 kilograms.
· The tail is medium length, wide at the base and tapering to a rounded tip.
· The paws are oval.
· The head has a distinctively heart-shaped with a tapering and not pointed muzzle.
· The ears are large and wide with slightly rounded tips. They are erect and always alert.
· The eyes are round and prominent with a luminous green color.
· The coat is medium length, glossy, silky to the touch, thick but soft and has no undercoat.
· The coat color is blue with subtle silvery tipping uniform all over the body. This is the distinctive feature of the Korat breed.
· A recessive dilute gene may produce a lilac, blue point or lilac point offspring and they are called Thai Lilac or Thai pointed variation of the Korat but are considered as faults.

· The Korat is an affectionate and loving breed, wanting to be by their human’s side
· Their personality is in between being social and needing companionship to being exclusive.
· They do not like to be left alone for long periods or be ignored by their human companions.
· Their movement is soft and graceful even if they are muscularly built.
· Their temperament is generally calm and quiet but they can sometimes be playful, energetic and hyperactive.
· They do not like loud noises so they are best off living with calm people.
· Their voice is soft and they are not a very talkative breed.
· They are intelligent cats who can learn tricks and are generally gentle with children.
· The Korat is mostly intolerant of strange cats but can accept other cats in the household as long as they (the Korat) are the acknowledged ruler of the home.

· Upkeep and grooming is easy as the Korat needs only regular brushing and combing.
· The Korat can adapt either as an indoor or outdoor cat but they thrive better indoors because they do not like sudden loud noises

· In Thailand, if you give a pair of Korats as wedding gift, it is believed to bring good fortune and happiness to the newlyweds.
· In ancient times, it is customary to give a Korat to princes and notables as a sign of devotion.